Irish, its Irish, very Irish, so Irish. I like it, I like Ireland, I like the Irish. This is another recipes we’re doing for Samhain, which is traditional Halloween, but Halloween sounds better so I’m going to call it that. Usually you’d make it 100% with beef chunks, but we are but humble commoners so we used a pack steak chunks and steak mince instead. 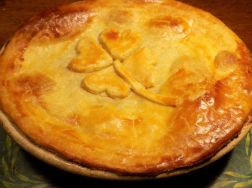 1. In a bowl, tip in the steak chunks and about half of the flour, then break the mince up and tip that in, add the rest of the flour and mix until all the meat has an even coat of flour. For some reason the flour kinda dissolved on the meat so you cant see it, It doesn’t matter, just because you cant see it doesn’t mean its not there, you’re not 4, I hope.

2. In a big pan, heat the oil and butter until the butter has melted, tip in the meat and fry quickly just to brown the outside. Remove the meat from the pan into a bowl, keeping the juices in the pan.

3. Cook the onions and carrots together in the pan the meat was just in, cook for a couple minutes or until the onions are going soft.

4. Tip the meat back into the pan along with the rest if the ingredients, stir really well. A problem mine had was that I didn’t stir it enough, so the sugar stuck to some parts more than others, so there were chunks of sweet meat and others that were super beery. Bring to a boil, then reduce the heat to a simmer, cover the pant with a lid and simmer for 2 hours or so, stirring occasionally, like every 10-20 minutes or so.

5. Roll out the pastry to slightly larger than the circumference than the pie dish you’re using (the pastry is only going on the top). Once the filling is done cooking, let it cool slightly before tipping it into the pie dish. Put the pastry on top, trim the edges and press them down. Pre heat oven to gas mark 6/200*C/400*F. Do a nice design on top if you want (on the pie, not the oven) and brush with a bit of milk or beaten egg. Cook for about 25-30 minutes or until the pastry is golden brown. Done 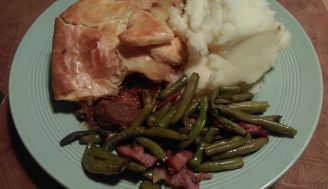 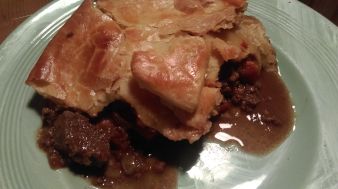