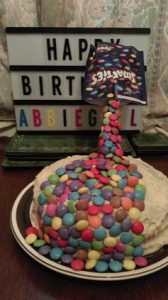 As you may have seen from previous posts it was Abbie’s 13th birthday a couple of days ago. She did want to  make her own birthday cake originally but I convinced her that she had enough to do with the buffet food she was already making.

I finally decided what cake to make her on the morning of her birthday. I didn’t have one of the ‘gravity’ cake kits but I did have some new chop sticks in the house so used them instead, it still worked, thankfully.

Made using a standard chocolate sandwich cake mixture & Abbie made her famous buttercream for it.

All I did was tape 2 chopsticks together and insert them into the cake. I then melted some chocolate and stuck smarties up 3/4 of the length of the chopsticks. Next smarties were placed on the top and the cake and the smarties packet was taped to the top of the chopsticks.

Next time I do one of these, probably for Jess’s birthday in August I will take photo’s as I’m going along so you can see the steps involved. Really simple to do though.