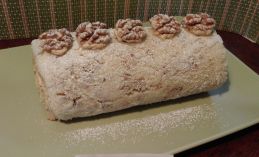 This is another twitter bake along that I decided to try, I’m glad I did. The first attempt failed at the rolling part as it cracked and broke, but the second try was a success. I’m almost sure my grandad liked it, and everyone else seemed to as well, so it was worth the effort. Its sorta difficult, especially if you aren’t used to this sort of stuff, like me, but its a lot easier once you know what do to.

1. Preheat oven to gas mark 6/200*C/400*F. Put the walnut halves onto a baking tray and bake for 5 minutes or until slightly darker. Leave to cool, pick out 5-6 of the best looking halves and put them to one side. Finely chop the rest if the walnuts.

2. Put the eggs and sugar into a bowl and beat, with and electric mixer, until it has just more than doubled in size. Carefully fold in the flour a few tablespoons at a time (as much air as possible should remain in there), then tip in 3/4 of the chopped walnuts and the butter and gently fold into the mixture.

4. Line a swiss roll tin with baking paper, we just used a shallow tin. Pour the mixture I to the tin and smooth out. Bake for about 10 minutes or until its slightly golden brown and spongey.

5. While its baking, prepare a flat surface by pitting down a large sheet of baking paper, generously dusted (i dont think dusted is the right word) with caster sugar. Once the sponge is done, leave it to cool for a a few seconds, but no more than that. With the help of kitchen towels or something, flip the sponge out the tin and onto the prepared sheet.

6. Trim the edges if necessary and score a line 3/4 inch or so from where you will start to roll. This is the tricky bit, and where my first one failed. Fold over the edge of grease proof paper over the scored side and start to gently roll, it WILL crack and it will be FINE. You need to roll it with tue baking paper so it doesn’t stick to itself. Leave it to cool, seam side down. (By the way, all this need to be done while its still hot, sorry)

7. While it’s cooling, mix the water and granules until they’re dissolved. In a large-ish bowl, put the cream, sugar and coffee water and beat until it’s like a thick buttercream, easily spreadable but too thick. Wrap the bowl in cling film and refrigerate until the roll has cooled.

8. Once the roll has cooled, carefully unroll it. IT WILL CRACK, I REPEAT, IT WILL CRACK. Just do it as gently as possible. Ok, once that nightmare is over, spread the coffee filling all over it, but leaving a centimetre or so around the edges. Sprinkle the remaining chopped walnuts over the filling and roll it back up the same was as last time. It will probably crack this time as well but who cares? Not me at this point.

4. To finish it off, put a little filling on the picked walnuts and arrange them on top. Sprinkle a little icing sugar and Done!