This one was kind of a original recipe but also loosely following an actual recipe. At one point the chicken came back to life and tried to escape, but I wouldn’t let it. Had to bludgeon it again with a rolling pin. Its a pretty easy recipe to be honest, I just got impatient with the breadcrumbs and ate half the bread before they even made it to the crumb stage.

1. Needa make breadcrumbs out of the bread, the way I did it was ripping the bread into chunks and microwaving it for about 3 minutes, taking it out and spreading them on a chopping board to cool until hard. Then, blend them in a blender. I hate this part, my blender is evil, got PTSD just looking at it and remembering the scalds if gave me by throwing burning soup at me. Scary stuff, nan thought it was funny while I considered my options. A) Face the blender. B) Run and never look back, get a new identity, make a new life in the sewer with radioactive turtles. C) Beat up the blender, becoming the king of blenders and take over the world. I ended up just sucking it up and doing it, I made it out alive, just about, I may never walk again and I will forever be haunted by that high pitched VVVVVVVVVRRRRRRRRRRRRR but the end result was worth it. Anyway, all the bread should be bread crumbs now.

2. In a small bowl, mix together the parsley, thyme, salt, pepper and lemon. It’ll clump together a bit but don’t worry, the breadcrumps separates it for the most part. That  being said, mix in the breadcrumbs, mix well.

3. Get the chicken and beat it until they’re both the same thickness throughout. Use the extra salt, pepper and thyme to season both sides of the chicken. Heat the oil in a large skillet/frying pan. preheat the oven to gas mark 4/180*C/350*F. Prepare a baking tray with a wire rack on top.

4. on 3 separate plates, put the egg, breadcrumbs mix, and flour. Cover the chicken in the flour, patting off excess. Gently drag them through the egg, letting excess drip off, then push them into the breadcrumbs making sure they’re thoroughly coated in it, put them in the skillet and frying for about 2 minutes on a medium heat on each side, until nice and brown on both sides. Transfer to to plate lines with kitchen towel to absorb the oil, then transfer to the wire rack and cook for 10-20 minutes or until cooked through and firm, the cooking time depends on the thicc of the chicken. And BaM you be done. 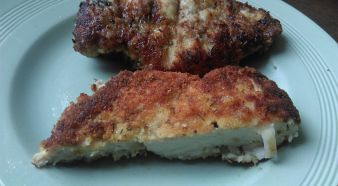